France-IX is today the leading provider of peering services in France and connects over 500 players with a wide range of profiles on its neutral exchange points in Paris, Marseille and Lyon - telecom operators, ISPs, content and cloud infrastructure providers, companies in the fields of online media, video games, social networks, security services or even datacenters and multinational companies.

By joining the France-IX community, you benefit from a recognized quality of service and a range of services that provide increased and secure connectivity, as well as reduced latency and costs. Make the choice of an optimized connection now!

The France-IX exchange point is built on an associative model allowing a better involvement of the connected members in the major orientations of the IXP but especially a neutrality.

Our exchange point is therefore based on an association under the French law of 1901, to which all members are de facto members, and on an SAS in charge of the operational aspects (billing, supervision, technical support).

The France-IX association is a 100% shareholder of SAS France-IX Services. As such, any important technical or financial evolution will be submitted to the approval of the members of the association.

France-IX expands its activities and becomes a true multiservice platform

Evolving to adapt to the challenges of companies

In order to reinforce its growth and after 10 years of existence, France-IX is taking a new step in its development and is now positioned as a multi-service platform.

Providing proof of transformation through a more complete offer

France-IX is launching new services for businesses and expanding its scope of activities through interconnection, hosting and infrastructure management services.

Providing services that address a need for versatility

France-IX meets the expectations of its members who want to benefit from integrated services for greater simplicity, flexibility and mutualization of both infrastructures and costs, while meeting the challenges of data and flow management.

France-IX: the partner of companies for their digital transformation

The explosion of data exchanges forces companies to optimize the management of their flows. This management requires an optimal Internet connection and control of data hosting. Between peering, its initial activity, and its new interconnection, hosting and infrastructure management services, France-IX is able to respond to these business issues.

By using all of France-IX's services and being connected to the platform, organizations can benefit from its advantages, which are not only time and cost savings, but also state-of-the-art technical expertise.

A single port, a multitude of services

By connecting to France-IX, you can access all the connectivity, infrastructure and support services available from our PoPs and VPoPs. All the services of our marketplace providers are also at your fingertips, via your single connection port.

France-IX is THE shortcut to your favorite Internet destinations: operators, GAFAMs, content distributors, critical applications... Discover how to optimize your connectivity today: 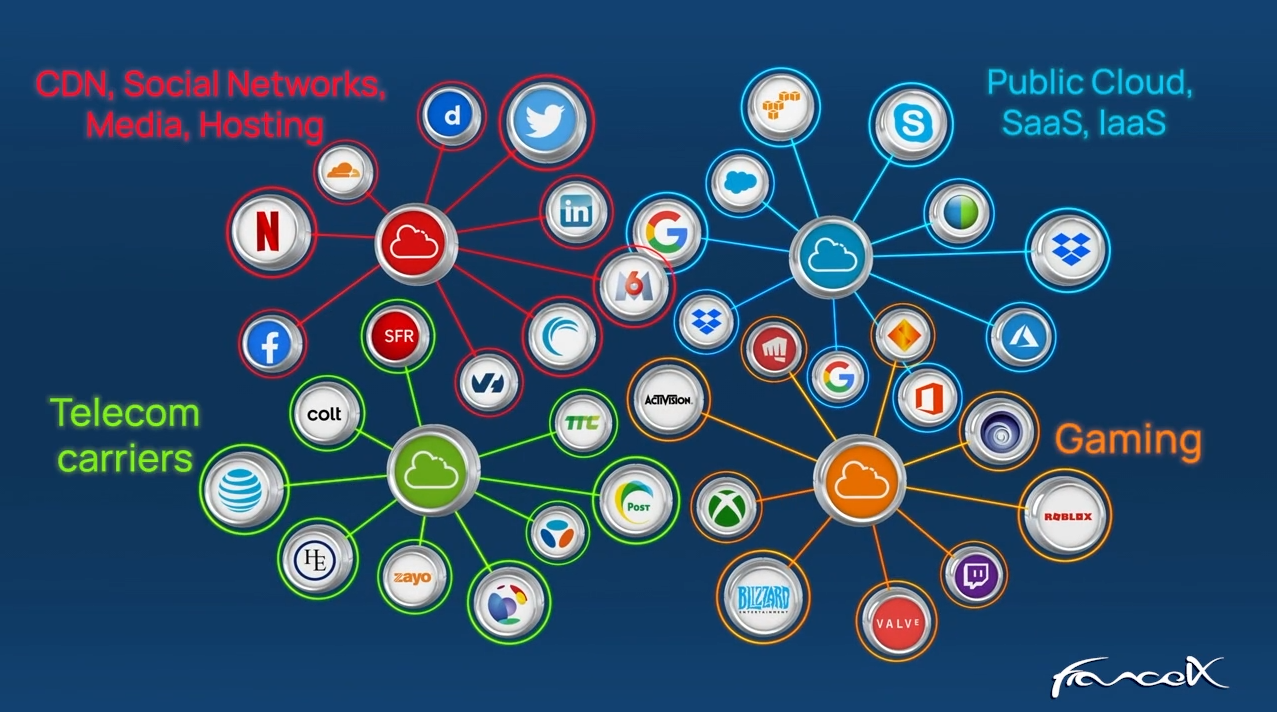 Marketplace of over 40 service providers 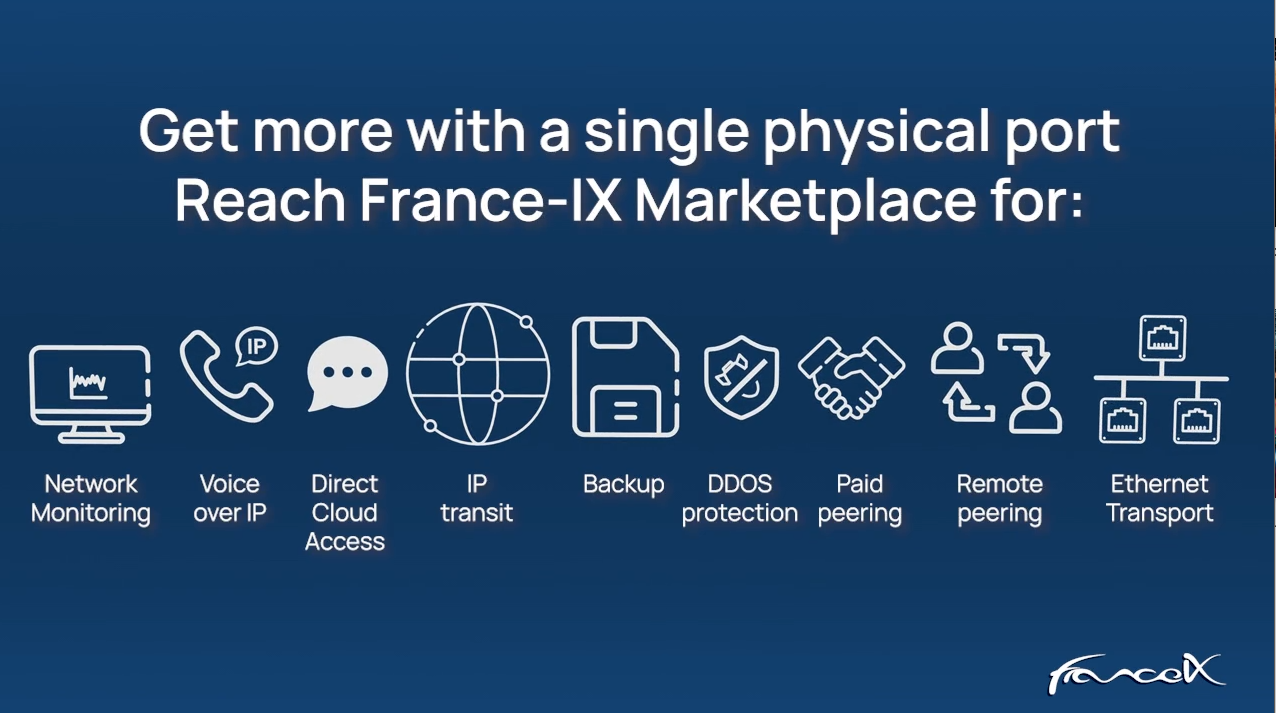 Founded in June 2010 by Akamai, Bouygues Telecom, Google, InterXion, Jaguar Network and Neo Telecom (now Zayo France) with the support of the French Internet community, France-IX's primary mission is to be the neutral federating exchange point for telecom and cloud operators in France.

With offices in Paris, Lyon and Marseille, France-IX's mission is to enable all of its customers (more than 500 to date) to benefit from a very wide range of services focused on optimizing data exchanges and transfers. France-IX interconnects several hundred local, regional and global players in France (telecom operators, ISPs, content providers and cloud infrastructure providers) and today addresses all types of companies wishing to optimize their costs and their Internet connectivity. France-IX's mission is to develop excellence in the implementation of its services.

France-IX invests regularly in its infrastructure and in the training of its technicians and engineers in order to deliver optimum quality services to its customers. Finally, France-IX's mission is to promote the values on which it is founded: neutrality, sustainability and constant improvement of the Internet.

In 2010, France-IX puts an end to the exception in the French Internet world that did not have a neutral and independent exchange point. France-IX has federated French and international Internet players around a real community of interest, which has continued to grow year after year.

Launch of the France-IX reseller program and the Tools customer portal.

France-IX ranked in the top 10 IXPs in Europe.

Delivery of the first 100G port.

Partner in the launch of exchange points in Casablanca (CASIX) and Senegal (SENIX).

300 members in Paris and Marseille.

Launch of the France-IX marketplace.

Merger with Rezopole allowing a wider range of services.